A gaming computer is a powerful PC that can be used not only for entertainment. A machine with such a performance allows you to work with graphics, video editing and 3D modeling on a professional level.

The processor is the heart of the computer around which the whole system is assembled. The processor depends on the choice of the motherboard, it indirectly affects the selection of the video card, RAM and some other components of the system.

Now there are two manufacturers on the market: Intel and AMD. AMD processors are generally inferior to Intel in performance, so they are used to build budget computers.

When buying a processor, you need to pay attention to the socket. This is the type of connector on the motherboard where the processor is installed. Processors with one type of socket are compatible only with the same socket motherboards. Therefore, the replacement of the processor can lead to the replacement of the motherboard. This should be taken into account when possible future upgrades of the system. Current Intel sockets at the moment: LGA1151 and LGA2011-3.

Other important parameters of the processor: the number of cores (they allow performing multithreaded operations, the optimal value is four cores), the processor frequency (optimally 3.2-3.6 GHz with the possibility of overclocking to 3.9-4 GHz), the cache volume and the availability of the unlocked factor.

When building a powerful gaming system, it is better to choose Intel Core i5 and Intel Core i7 processors. These processors fully reveal the capabilities of the entire system. Intel Core i3 can also be used to build a gaming computer, but in a couple of years the system will begin to lose relevance. In addition, Core i3 processors will not be able to fully unlock the potential of a system with two video cards. Multithreading of Intel Core i7 processors will give a significant increase in performance when working in graphic editors and computational programs. The most current models of processors at the moment are “Sky Lake” and “Kaby Lake”.

When choosing a motherboard, you need to take into account its size (form factor) and socket for installing the processor (socket). You can build a compact gaming computer or a more massive system. The main formats are “ATX”, “E-ATX” and “micro-ATX”.

Many ATX-format boards have four memory slots, eight slots for extremely powerful computers, and only two slots can be found in small motherboards of the “micro-ATX” or “mini-ITX” format.

Another important parameter is the presence of several PCI-E x16 slots. They are used to install several video cards (SLI or CrossFire). Therefore, good motherboards have at least two slots for installing video cards.

A chipset is a chipset that allows the interaction of computer components. The chipset determines the system’s capabilities: overclocking the processor, the number of supported SATA and USB connectors, the maximum memory frequency and various additional functions: the presence of a Wi-Fi adapter, support for multiple graphics cards.

For Intel processors, the LGA1151 socket (for Intel Core i3 / i5 / i7) and the 2011-v3 socket (for the most powerful systems) are relevant. When you purchase an Intel processor for new generations, you will not need to change the motherboard, since its socket is compatible with both the new and the previous generation of processors.

The larger the cooler, the better the cooling of the processor. To overclock the CPU, buy massive tower coolers, for normal operation, a simple “tower” is enough. 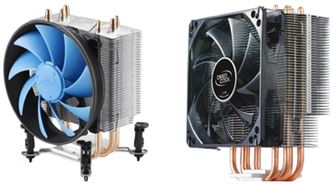 Large coolers take up more space inside the enclosure, but provide better cooling and work quieter due to the small number of rotations of the blades per minute. Small coolers are bought when assembling small systems, but they noisy and vibrate.

The cooler should be compatible with the socket of the processor. When choosing a tower cooler, it is necessary to take into account its height, so that it can fit into the case, and the thickness – for compatibility with high heatsink RAM.

At the same time, self-assembled water cooling systems are actively used by enthusiasts who seek to assemble a powerful, quiet and unique system. In this system, you can select all the details: the number of components to be serviced (processor, video card, RAM), the pump and its power, the radiator and fittings with various forms and connection options. In a self-assembled water cooling system, you can select the color of the circulating liquid, set your own lighting system. But this system has two significant drawbacks: high price and the need for regular maintenance: testing of connections and fluid replacement.

A gaming computer must have a powerful video card. The main manufacturers of video cards are “AMD” and “NVIDIA”.

AMD is cheaper. At the same time they are hotter and noisier, less energy efficient and less productive. “NVIDIA” is a bit quieter, they have better performance, good energy efficiency, but they are more expensive.

The most current video card is NVIDIA GeForce GTX 1000 series and AMD Radeon 400 series. The video card is one of the most expensive parts of the computer, so in some cases you can buy a video card from last year’s series, which also supports all modern games, but costs significantly less. But such a graphics card will quickly become obsolete.

Choose a video card is not difficult: the higher the series of video cards, the higher its performance. If you choose one model (for example: NVidia GeForce GTX 1070) from different manufacturers (for example: ASUS, ZOTAC, GIGABYTE, MSI, Palit), then you should pay attention to the cooling system, the memory capacity of the video card, the frequency of the graphics chip, the memory frequency, tires and possible options for connecting monitors.

To build a powerful gaming computer with support for Quad HD (2560×1440) and the ability to select the maximum graphics settings, use video cards: NVIDIA GeForce GTX 1080 / AMD Radeon RX 480.

For the most powerful gaming computers that need to support multiple monitors or 4K resolution, you need two powerful video cards (for example: NVIDIA GeForce GTX 1080 or AMD Radeon RX 480) using SLI or Crossfire (a technology that allows the use of several video cards for processing 3D images).

RAM is designed to store temporary data, for example, game textures. The current standard of RAM is DDR4. For most modern games will be enough from 16 to 32 GB of RAM, a minimum of 8 GB.

When choosing the RAM, you must pay attention to its clock frequency. The best option: 2400 – 2800 MHz. Also, one should pay attention to the memory heat sinks, which because of the dimensions may be incompatible with some air cooling systems of the processor.

“SSD” come with two types of memory: TLC and MLC. The difference between them is in the way information is stored. MLC-memory is more reliable, has more cycles of rewriting, but TLC-memory is cheaper. Modern solid-state drives are built using the technology of “3D NAND”, and here the difference between TLC and MLC memory becomes almost imperceptible – the resource of recording and the speed of such drives is higher. 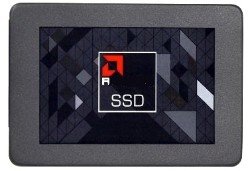 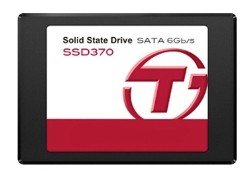 The latest novelty in solid-state drives is the “U.2” format, working on the new specification “NVMe”, designed specifically for solid-state drives. This format is designed to preserve the universality of the connection – it has the same 2.5 “form factor as conventional SSDs, and also connects using a cable, but uses the” PCIe “connection lines rather than” SATA “and therefore provides maximum bandwidth .

Optimum amount of SSD-drive: 256 – 512 GB. The size of the hard drive (for storing files) is 2 – 4 TB. The higher the rotation speed of the hard disk, the faster the file access, but the high spindle speed can cause more vibration and noise. 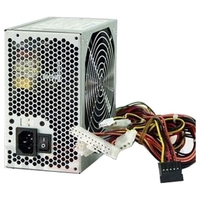 For a powerful computer you need a powerful power side, especially for a computer with multiple graphics cards. Next, you should look at the 80 PLUS certificate – it shows the efficiency of the power supply as compared to its declared power. The best option is the 80 PLUS Gold certificate. For medium-sized computers with a single video card, a power supply for 500-600 W (80 PLUS Bronze) will be enough.

It is better to buy a power supply unit for at least 700 – 800 W under the “80 Plus Gold” specification for stable operation without voltage dips.

On the power supply, you do not need to save, because replacing a burned video card or processor will cost more. At the same time, high-quality power supplies are provided with a multi-year warranty.

The main parameter when choosing the case – its compatibility with the format of the motherboard – in most cases it’s “ATX”. All buildings can be divided into two types: quiet and blown. Quiet enclosure is more closed and more fans are installed for cooling. Blown shells have a leaky body, and therefore all components in them are well cooled, but they make more noise. 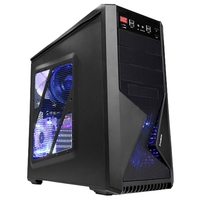 When choosing any enclosure, special attention should be paid to the maximum height the cooler can fit into it. With a water cooling system, there are no such problems, since the water block installed on the processor has a small height.

When choosing a case, you need to consider the number of places for hard drives and SSDs. Conventional hard drives are installed in 3.5 “connectors, solid-state drives – in 2.5” connectors, and DVD-drives remain 5.25 “seats, but in modern cases their number is reduced.
Pay attention also to the placement of the power supply, connectors on the front panel (USB, audio inputs), fan speed control, temperature panel and the number of seats for SSD and HDD.

Without special losses, you can save a little on the hard disk or the amount of RAM – it will not affect the performance of your computer, but will allow you to buy a more powerful graphics card or processor.


Additional Information. If you do not know how to connect an additional device to your computer, and you need instructions on how to connect it correctly, you can use the search bar on this website (located in the upper right part of any page) or write to us. 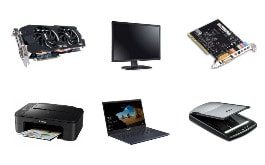